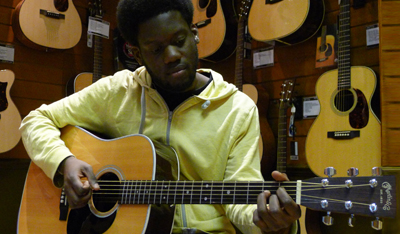 The amazing Michael Kiwanuka releases his much anticipated debut album Home Again on the 12th of March.

We’ve been delighted to watch Michael’s rather meteoric rise over the past year, and it’s always great when true talent shines out amongst the pretenders in the modern pop music industry. His soulful voice has received almost universal accolades from the music press and he was top of BBC radio 1’s Sound of 2012, which is no mean feat in itself.

Michael is massive fan of his distinctive Martin D18VS in Sunburst, and we are massive fans of the sound he makes with it!