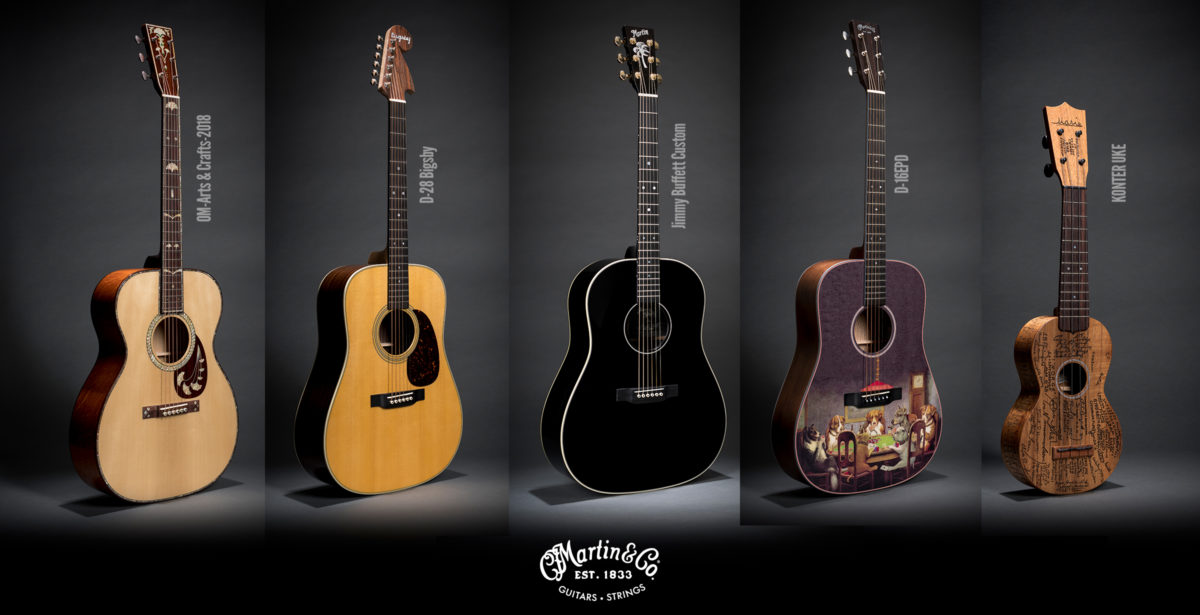 C.F. Martin & Co.® (Martin Guitar) will offer five new models at the 2018 Summer NAMM Show held in Nashville, from June 28-30. The company will debut their third Arts & Crafts inspired guitar, a D-28 Bigsby guitar, a Jimmy Buffett Custom Signature Artist Edition guitar, and a D-16EPD (Poker Dogs) guitar. The company will also debut a Konter Ukulele replica, which celebrates the most valuable ukulele in the world.

This is the third instrument from Martin that pays homage to the Arts & Crafts design movement that dates back to the late 1800s and often presents in the form of romantic, folk, or medieval style decoration. The movement was thought to be anti-industrial and advocated for economic and social reform. This ornate orchestra model features Arts & Crafts inspired pearl inlay designs throughout, paired with German white oak back and sides and Adirondack spruce top with a Guatemalan rosewood headplate, fingerboard, and bridge. The tonewoods for this guitar were selected for their significance in the movement because they were used by craftspersons and designers as alternatives to traditional industrial materials and excel tonally in the voice of the guitar. The OM-Arts & Crafts includes a comfortable high-performance neck, a Vintage Tone System (VTS) top, and vintage copper open gear tuners. This model is limited to 100 instruments and includes an engraved plate label signed by Chris Martin IV.

Martin partnered with Gretsch to debut a second Merle Travis inspired model that ­­pays tribute to the artist and the guitar he made famous in the late 1940s. Merle Travis is one of the most important guitar players of all time and is known for his unique playing style that is still known by guitarists as “Travis Picking.” The D-28 Bigsby is built on the foundation of a newly reimagined D-28 (2017) and is crafted with East Indian rosewood and features a maple high-performance taper neck fitted with the Bigsby headstock. The maple neck offers a unique tonal quality that adds sustain and brightness and pairs nicely with the warmth and depth of rosewood. The interior label is numbered and signed by Chris Martin IV and Fred Gretsch.

Legendary artist and chief Parrot Head, Jimmy Buffett, has used Martin guitars throughout his career, with multiple Martin signature models in his collection. Always looking for new and exciting instruments, Jimmy was inspired when he discovered Chris Martin’s CEO-6 Black model from 2013. Along with his guitar tech Dan Cook, Jimmy worked with the Martin Custom Shop to create a version of this guitar all his own. The result is a striking, sloped shoulder dreadnought finished completely with black lacquer and Jimmy’s signature mother of pearl palm tree swaying in the breeze on the headstock. The Jimmy Buffett Custom features a comfortable high-performance neck, a Fishman pick up, and a customized interior label bearing Jimmy Buffett’s signature. The model is released as Jimmy debuts his theatrical production “Escape to Margaritaville” which is currently running on Broadway before setting off on a national tour. As one might imagine, the show includes a slew of Martin guitars and ukuleles.

Inspired by classic Americana art from artist Cassius Marcellus Coolidge, this playful guitar features a 1903 painting called A Friend in Need, which is printed on a Sitka spruce top. The artwork is part of a series of 16 oil paintings that were commissioned by Brown & Bigelow in the 1900s to advertise cigars. The Style 16 Dreadnought guitar includes sycamore tonewoods, a high-performance taper neck, and comes equipped with Matrix VT Enhance™ electronics.

The Konter Ukulele may be the most valuable ukulele in the world. It was owned by Richard Konter, “Ukulele Dick,” who joined Admiral Richard Byrd’s famed expedition to the North Pole in 1926. During the expedition, he obtained signatures at every opportunity, including those of all 45 crew members of the Admiral Byrd expedition and the Admiral himself. It’s the only artifact that travelled to the North Pole because it was smuggled under the seat of the airplane. The ukulele also made a trip to the White House and was signed by President Calvin Coolidge, along with the vice president, the secretary of state, the secretary of the Navy, Theodore Roosevelt Jr., Amelia Earhart, Thomas Edison, and many, many more. The soprano ukulele contains more than 210 signatures. The replica includes all signatures, which have been carefully laser-etched into the beautiful koa wood. The soprano ukulele also features vintage style violin peg tuners and a replica of the original interior label.