MESA/Boogie are famous for making versatile amplifiers but even MESA® fans will agree, with the many Series they make, each uniquely voiced and different, it can be hard to choose. Sometimes your mood or a gig demands a specific character or set of features you’ve grown to love, or a certain favourite with a sound or feel you find nowhere else. Maybe you’ve considered the expressive power of having two amps on tap but didn’t have a way to facilitate using them together? Considered a Dual Rectifier® and Mark V® for example… talk about covering the complete spectrum! And even aside from that type of arsenal, everyone can appreciate the benefit of having an instant back-up amp on a footswitch for gigs.

Whatever the scenario, we now have you covered with the most comprehensive solution available for switching between amplifiers. Introducing the Head-Track™ Head Switcher and Switch-Track™ ABY.

Whether your application is performance, instantly selecting between your favorite amps at home, or creating a one button solution in case of a failure on the gig, these professional switching devices are made with the same quality parts in the same Petaluma, CA Facility as our Award-winning amplifiers and will provide years of rugged service.

The Switch-Track™ enables an either-or-both, ABY scenario for your two favourite amplifiers. Select between two different amplifiers, two identical amps for more Channels and sonic options or combine them for a bigger, fuller sound, or a specific blended character.

The INPUT is buffered to prevent signal loss due to increased loading when both amplifiers are engaged. Both OUTPUTS are transformer isolated for consistent tone and provide unbalanced or balanced signals for longer than normal cable runs. The “B” OUTPUT’s Ground is default-lifted to eliminate Ground loops. 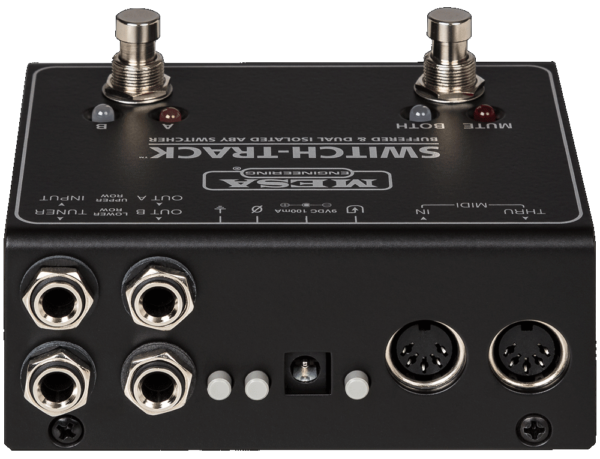 The switching (including phase) can be triggered at the unit itself for Pedal-Board mounted applications or remote controlled via Midi Program Change (or Control Change) commands sent from a Midi Controller in scenarios that require the ABY be located at the amplifiers or in a larger Touring Rack setup.

The Head-Track™ gives you the ability to instantly select between two amplifiers, yet employ the same Speaker Cabinet and Effects setup. It is intended for use near the amplifiers being switched to maintain the shortest Cable lengths, thereby protecting the integrity of your signal, and has a Remote Switch jack so that a simple On/Off MIDI switching function, or Latching Footswitch located on your pedal-board, can control the switching. There is also an on-board Footswitch to switch between the two amps from the unit itself in the rare instance where the Head-Track might be used on the Pedal-Board.